Getting ready for the Fringe

Tom and I are gearing up for the Edinburgh Fringe — both of us are veterans of the Fringe, but this is our first time going up as a duo. 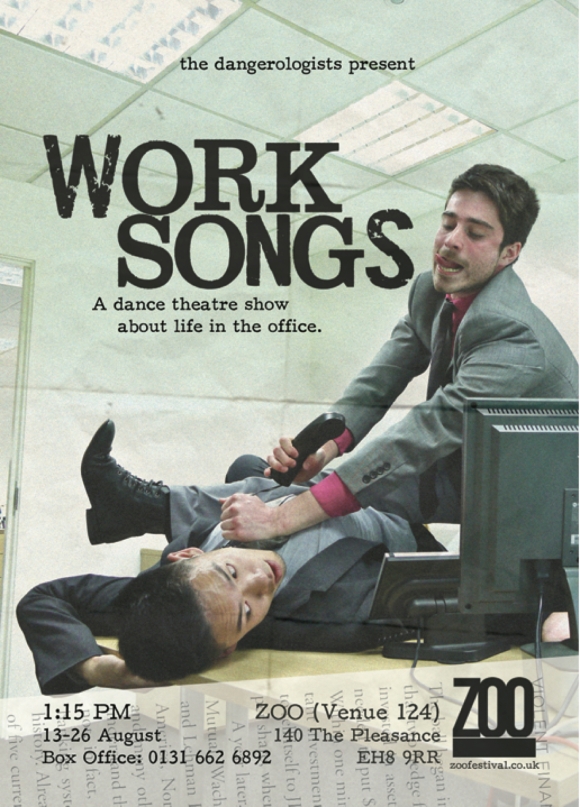 We’re playing from the 13-26 August at ZOO, Venue 124, at 1.15 PM everyday. Check out our links on the Edfringe and ZOO Venues websites for more info and to reserve tickets:

Images from Work Songs at Turn: A Microfestival of Dance, 3-5 May 2012, Contact, Manchester.

The Dangerologists will be showing Work Songs along with a post-show discussion at Chisenhale Dance Space at 7 PM on 19 May 2012. Details below:

Where: Chisenhale Dance Space, 64-84 Chisenhale Road, London E3 5QZ (Tube: Mile End / Bethnal Green)
When: 19 May 2012, Doors 6:45, Show 7:30. The performance is approximately 45 minutes long, to be followed by a 20 minute post-show discussion.
How much?: All tickets £7.
BOOKING IS ESSENTIAL – Go to worksongschisenhale.eventbrite.co.uk

A love song to the mindless drudgery and hopeless alienation of office work. A dynamic mix of dance theatre and professional wrestling.

In a thoroughly average corporate office, Tom and Brody are risk analysts with a Sisyphean job; a inbox that never gets smaller. They work and fight and look forward to lunch. Then one day the good chair is taken away and all hell breaks loose.

Work Songs is a dance-theatre and physical comedy performance exploring concepts of labour, training, attention, effort and exhaustion. the dangerologists devise physical theatre around a process of intensive physical training and the working model of ‘rowdy play.’ Work Songs explores forced relationships formed on competition and close proximity. As the two guys compete for promotions and esteem, their conflict is physicalized in the most literal way as they wrestle for the company’s love. By investigating the concept of physical work through the office environment, the dangerologists explore concepts of masculinity, daily drudgery, and the possibility of fulfilling work in the new economy.

Broderick Chow is a Canadian performance maker now living in the UK. He spent 5 years as a stand-up comedian on the UK circuit, and his previous solo work has been a mix of monologue, movement and multimedia. He is a lecturer in the School of Arts at Brunel University, and a doctoral graduate of Central School of Speech & Drama.

Tom Wells is a physical performer whose work has encompassed a variety of forms both stage and screen and site specific. Tom is artistic director of B-Road Theatre Company, whose aim is to bring theatre to the rural heart of Lancashire.